Entonces se bajó, y agarró su hacha o su pico que traía, creo que era un pico, y tumbó la puerta como pudo y allí estaba yo tirado en el suelo muy, muy mal, morado desde el cuello hasta los pies.
So he bent down and grabbed his hatchet or his pickaxe that he brought, I think it was a pickaxe, and he broke down the door the best he could and I was there sprawled on the floor very very sick, purple from my neck down to my feet.

There are two other subject pronouns that aren’t often mentioned in introductory Spanish courses: vos and vosotros. Vos is used in Argentina for the informal second person singular (you) instead of tú.  In several other countries, vos is also used along with tú: in Central America (El Salvador, Guatemala, Honduras, Nicaragua, Costa Rica) and the Southern Cone (Paraguay, Bolivia, Chile and Uruguay) So rather than replacing tú these countries often make use of vos, tú and Usted to mark different degrees of formality when talking to someone.

Cuando va mi papá allá, lo primero que le dice – mi hijo está interesado en vos – sin ningún cuidado.
When my dad goes over there, the first thing he says to her is “my son is interested in you“, without a care. 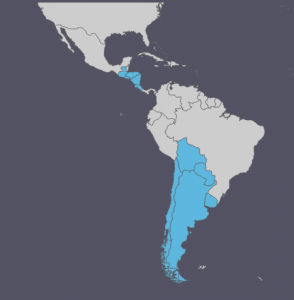 Chart: Countries that Use “Vos” 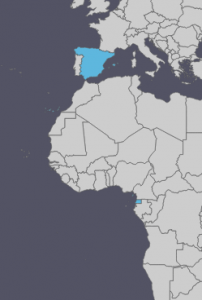 Chart: Countries that Use “Vosotros”

Unlike the English pronoun I, yo is not capitalized unless it begins a sentence.

The pronoun tú is singular and, importantly, informal. Use tú to address people your own age and those you know well.

The pronoun usted is singular and formal. Despite of its meaning (you), grammatically it is a third person pronoun, meaning that it will always be used with third person verbs: Usted es

Ellos and ellas agree with the gender of the noun they replace. Ellas is used to mean they if it replaces people who are all women. On the other hand, ellos is used for a group of all men or any group where there is at least one male person in the group.

The pronoun ustedes is always plural. Despite of its meaning (you/y’all), grammatically it is a third person pronoun, meaning that it will always be used with third person verbs: Ustedes son.

We use cookies and external scripts to enhance your experience. By using this site you are accepting the use of such cookies.

This site uses cookies – small text files that are placed on your machine to help the site provide a better user experience. In general, cookies are used to retain user preferences, store information for things like shopping carts, and provide anonymized tracking data to third party applications like Google Analytics. As a rule, cookies will make your browsing experience better. However, you may prefer to disable cookies on this site and on others. The most effective way to do this is to disable cookies in your browser. We suggest consulting the Help section of your browser or taking a look at the About Cookies website which offers guidance for all modern browsers.

NOTE: These settings will only apply to the browser and device you are currently using.

We use cookies to analyze our website traffic. We also share information about your use of our site with our analytics partners who may combine it with other information that you’ve provided to them or that they’ve collected from use of their services. Cookies are alphanumeric identifiers that we transfer to your computer’s hard drive through your web browser. They make it possible for us to store your navigation habits, recognize your browser when you visit. It is possible to prevent cookies from being used in your browser by turning the feature off, but in order to make your experience better, your browser must be set to accept cookies.